In today’s society, which is so quick to “cancel” personalities based on an inappropriate comment or action, German composer Richard Wagner’s enduring popularity is part of his appeal to scholars. After all, he was notoriously anti-Semitic; his writings on the Jews and his music were later adopted by Hitler and the Nazis.

“For better or for worse, Wagner is the most influential figure in the history of music,” writes Alex Ross in his book “Wagnerism: Arts and Politics in the Shadow of Music,” which delves deep into the many works of the German composer. cultural heritage.

But his sprawling influence is not just posthumous.

During his lifetime, Wagner also managed to capture the spirit of his times and became “the inventor of the so-called myth of modernity”, says American music historian Michael P. Steinberg, who is the curator of a new exhibition at the Deutsches Historisches Museum (DHM) in Berlin, “Richard Wagner and the nationalization of sentiment”.

For Steinberg, the German-language title of the exhibition, which translates directly to “Richard Wagner and the German Feeling”, refers to two levels of interpretation, the first being that Wagner taught his (German) audience to “feel” through his musical works; on the second level, he also taught them to “feel German”, saying that “the only real music is German”.

Steinberg also points out that dealing with Wagner today – whether as an opera lover or as a historian – means acknowledging the composer’s creative genius while examining and critiquing his ideology.

With this in mind, the curator selected four sentiments that were at the heart of Wagner’s work and life, and which also reflected the political and social issues of his time.

The first feeling, “Alienation”, refers to an attitude developed by the young composer during his three-year stay in Paris, from 1839 to 1842. There he decided to reject the traditions of French and Italian opera and to focus on developing a new German opera. lyrical tradition.

European society in the 1830s and 1840s also expressed dissatisfaction with prevailing power structures. It was a time marked by upheavals and revolutions.

Even though Wagner’s musical dramas are set in a mythical and distant past, the exhibition reminds us that works made before 1848 “can be understood as an expression of the current revolutionary spit”.

For example, his operatic characters in “Flying Dutchman” and “Lohengrin” are wandering outsiders, hoping to escape narrow-minded society.

Another event demonstrating how Wagner’s actions merged with the social pulse of the time is the Dresden uprising in May 1849. Its participants hoped to revolutionize the conditions prevailing in society.

Artists in the fields of music and theater were also agents of change, and Wagner was among those who took part in the failed revolt. He went into exile in Switzerland to avoid being arrested, where he wrote several essays defining his artistic ideals, while creating numerous musical works which established his international fame. 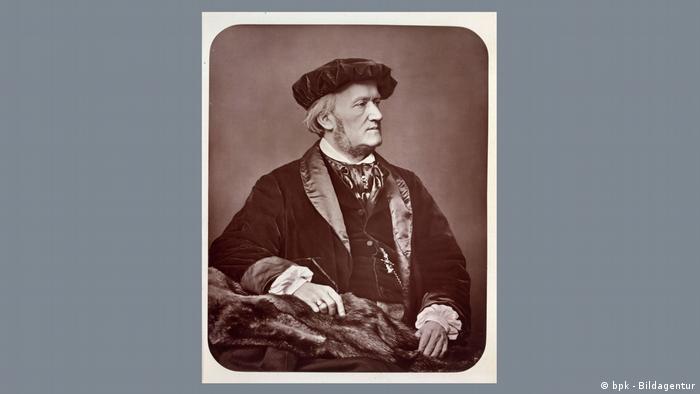 Wagner also established his “mark” by having several photos taken of him, such as this one from 1871

Belonging or defining a German identity

The second sentiment examined by the exhibition, “Belonging”, focuses on Wagner’s contribution to the process of defining a German national identity.

After the political ban imposed on Wagner was lifted in 1862, he returned to Germany and won the support of Bavarian King Ludwig II as patron.

After the wars of German unification in the 1860s and the founding of the German Empire in 1871, the nation’s self-understanding became a central issue in politics, science and the arts.

The composer definitely saw himself as embodying the soul of the country, writing in his diary: “I am the most German being, I am the German spirit”.

Wagner’s creation of the Bayreuth Festival in 1876 and its opening work, his four-part “Ring of the Nibelung”, also express the search for the presumed origins of German folk tales and myths which would reinforce this national identity.

“Die Meistersinger von Nürnberg” celebrates “what is German and true” notably through the opera’s climax, with the character of master singer Hans Sachs warning against “foreign mists and foreign vanities”.

While Wagner never explicitly defined a character in his works as Jewish, the figure of Beckmesser in this work is considered by many scholars to embody Wagner’s stereotypical and racist views of Jews.

And this work later served as a soundtrack for the Nazis, for example during the inaugural celebrations of the Third Reich in 1933, which adds to its loaded legacy. 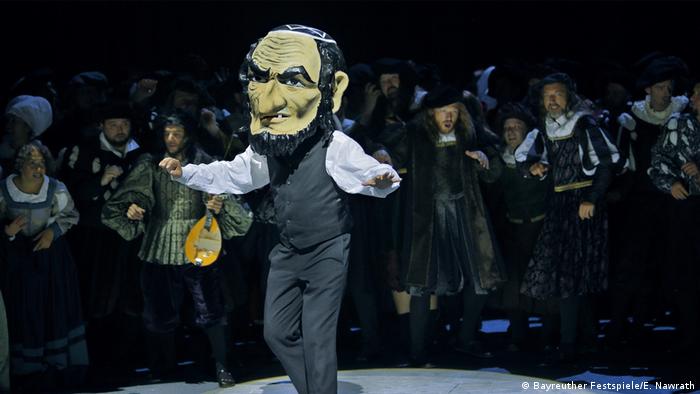 In the “Eros” section, the exhibition examines how desire and possession were central concepts in Wagner’s private life as well as in his works.

The composer had many love affairs, but was also known to be a dandy who appreciated expensive clothes and furniture. Although he was often in debt, he found sponsors to continue supporting him. Wagner thus anchors the image of the artist who lives freely, outside bourgeois conventions.

The composer is not, however, the only one to covet material comfort. The German Gründerzeit, a period of rapid industrialization in the 1850s and 1860s, stimulated the population’s new desire for luxury and consumption.

And “eros” also refers to the idea of ​​longing, which drives the plot of many of Wagner’s musical dramas, from the enchantress Lorelei in “Rheingold” to her story of doomed lovers, “Tristan und Isolde.” 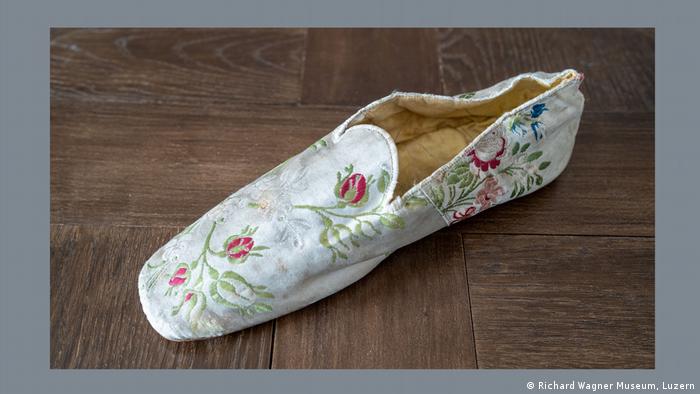 A slipper worn by Wagner shows his taste for fine clothes

Disgust or the healthy body as a metaphor for anti-Semitism

The feeling of “disgust” explored in the fourth part of the exhibition recalls the scientific innovations of the time linked to knowledge of the human body.

As awareness of hygiene and health grew in Germany, treatments such as drinking water cures became increasingly popular in the 19th century.

Wagner was among those who regularly visited such spas to cure his various ailments and find a quiet retreat to create.

But the image of the pure body also served as a metaphor for anti-Semitism, and Wagner used his influential voice to spread hatred of Jews. His essay “Judaism and Music” was just one of his many writings that decried Jewish influence in society and politics.

The composer embodies and reflects Germany’s highest achievements, as well as the most troubling aspects of its identity, which is why there is even more to be learned from him by taking a closer look at the controversial figure, rather than by simply canceling it.

“Richard Wagner and the Nationalization of Sentiment” is on display at the Deutsches Historisches Museum in Berlin from April 8 to September 11, 2022.