“Your Inner Zoo”: How Nonhumans Help Us Understand Ourselves

By exploring the biology and behavior of animals, as well as the cultural roles animals play in symbolism, mythology and lore, Belinda Recio’s expansive and unique new book Your Inner Zoo: A Guide to the Meaning of Animals and the Information They Offer Us asks us to approach animals as a source of provocative ideas that can lead to self-discovery and a deeper sense of connection with the more than human world.1

I found it to be a fascinating read, and in many ways it reminded me of an interview I did with Boria Sax about his book Avian illuminations: a cultural history of the birds, in which he discusses the many roles that birds have played in different human societies, ranging from food, messengers, deities and pets to omens, muses, timekeepers, guardians, hunting companions, decorative motifs and , above all, embodiments of our aspirations.

I’m glad Belinda was able to take the time to answer a few questions about her thoughtful and inspiring new book. Here’s what she had to say.

why did you write Your Inner Zoo: A Guide to the Meaning of Animals and the Information They Offer Us?

I wanted readers to recognize how much animals have contributed to how we see ourselves and the world. Thus, in Your indoor zoo, I present natural and cultural ideas associated with animals and invite readers to look at themselves and their lives through a zoological lens.

As readers develop a “zoology of self” – a sense of how animals live within them in the form of ideas and ideas, intuitions and instincts – they will realize that the animals we share our world with have helped shape who we are. as a species. I hope such awareness will deepen feelings of kinship with animals and inspire them to support conservation ethics.

Marc Bekoff: How does your book relate to your background and general interests, and how does it follow up on your latest book, When animals save?

BR: For many years I have been researching animal behavior and learning about the emotional and cognitive similarities between humans and animals. This research inspired my two previous books, Inside the hearts and minds of animals and When animals save.

But I have also long been interested in how animals have contributed to the cultural heritage of humanity through symbols, folklore, myths, art and traditions.

This interest led me to write Your indoor zoo. Although Your indoor zoo does not follow directly When animals save and Inside the hearts and minds of animals, all three books share a common focus on the myriad ways humans and animals are connected. 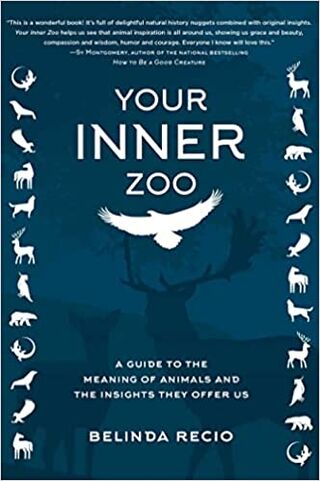 MB: Who is your target audience?

BR: Anyone interested in animals will appreciate Your indoor zoo, but it will particularly appeal to readers interested in animal symbolism, the relationship between animals and the human imagination, and the roles that animals play in human cultures, especially those that view animals as sources of wisdom.

BR: Your inner Zoo explores the ways in which animals, through their natural and cultural histories, offer us insights that can help us better understand ourselves and our world. Think back to prehistoric times, when animals held a special place in the human imagination because of their abilities and behaviors.

Animals often know when the weather is going to change and which plants are poisonous. They know how to hunt, heal themselves and build shelters. Some can fly, others can breathe underwater, and many can see, hear, smell, or sense the world in ways beyond our perception.

Early humans wanted to know what animals knew, so they spent time observing and learning from them. Over time, as humans observed animals, they came to associate certain ideas with their behavior. For example, they saw the persistence in a badger’s relentless digging for roots and the foresight in a squirrel’s caching of nuts for future consumption.

These observations became insights that people used – and still use – to better understand themselves by inviting comparisons between humans and animals. Someone might “harass” their friends by engaging in repetitive and persistent behavior. Constantly saving for retirement could be described as “scattering” your money.

It has always been easy to seek out and recognize aspects of ourselves in animals – as opposed to other people – because humans tend to perceive characteristics, habits, abilities and other qualities as more concentrated with the animals. This is why our observations of animals have given rise to animal symbols and idioms, such as the badger and squirrel examples I just mentioned; popular tales, like that of the cunning fox, which constantly outwits its adversaries; cultural traditions, such as totemism, in which animals are used as emblems of identity; and shamanism, in which animals are believed to provide guidance and protection.

MB: How does your book differ from others that deal with some of the same general topics?

BR: Difficult to compare Your indoor zoo to other books because it’s quite unique. It’s part dictionary of animal symbolism, part field guide, and part meditation on how animals help us understand ourselves and the world. For example, in the Hawk chapter, I present aspects of the natural history of the hawk and intertwine it with the symbolism, metaphors, folktales and beliefs that hawks have inspired.

Then I suggest ways to apply the ideas associated with hawks to our own lives. For example, hawks can, through their elevated vantage point when soaring, draw our attention to the value of global thinking. They can remind us that when we take a big picture view of things, it’s often easier to maintain our objectivity, allowing us to see patterns and make connections.

Another example comes from hunting. Hawks watch their prey with intense focus, and when an opportunity presents itself, they seize the moment without deliberation, teaching us the value of opportunism.

MB: Do you hope that as people learn more about animals, they will treat them with more respect and dignity?

BR: Yes. I believe that the more people learn about animals, the more likely they are to treat them with respect and compassion. We are already seeing positive changes in people’s attitudes, but we still have a lot of work to do!